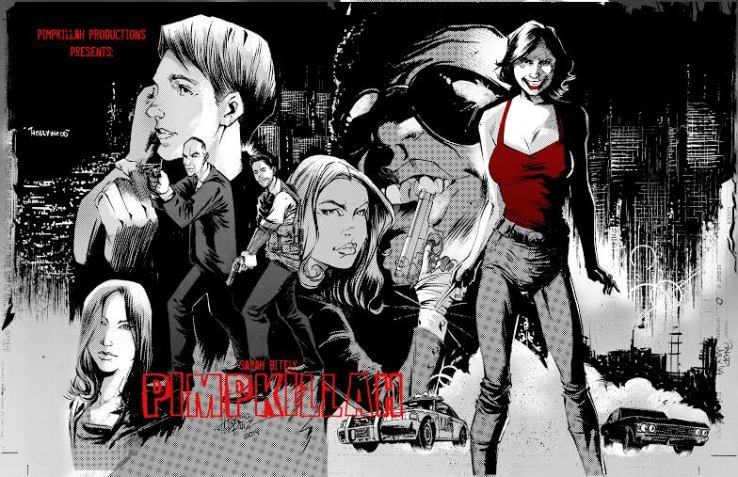 Sarah Bitely is the creator of Pimpkillah. It’s a comic about Sloane Stone, a woman who descends into a dark world of crime to avenge her sister who was nearly beaten to death by a pimp. Pimpkillah is a gritty revenge tale filled with betrayal, guns and pimp slapping. Sarah talked to me about her inspirations, showing the comic at Cons and the future of Pimpkillah.

Ryan: What would you say is the greatest inspiration behind Pimpkillah? I assume you don’t go around cutting up bad guys yourself.

Sarah: Ha, no I don’t. At least not yet. I’m fascinated by revenge stories. Incidents or experiences that cause normal people to snap. I think that concept is really interesting to explore. I also strongly believe in vigilantism. Though law enforcement works hard to serve justice to those who are wronged not all victims get that kind of satisfaction, especially if victims might be considered “high risk” such as sex workers. Sloane Stone is an anti-heroine who breaks barriers between right and wrong as she serves her own sense of justice. She does go about it in a somewhat unethical way. Vengeance is what drives her, yet at the same time it’s also her downfall. Not everything is paradise after the bad guy dies. It’s a vicious cycle. Sloane has yet to learn that violence may not solve all the world’s problems.

Ryan: The artwork in The Retribution is really great. What was it like working with [artist] Alfonso Ruiz? Did you send him rough sketches or just lay out what you wanted him to draw?

Sarah: Working with Alfonso is such a dream. I feel so lucky to have finally met an artist who really understands my vision and can build upon that. He lives in Mexico so unfortunately we can’t collaborate in person. I send him my script and we have discussions about the pages and what looks I am going for. My scripts are extremely detailed in regards to the layout, panel composition, angles, perspectives, shading, etc. I can be a little demanding to work with because I have such a vivid picture in my mind of how I want it all to look but Alfonso works really well with me. Or I should say he puts up with me really well. He’ll tell me if something isn’t working on the page and we’ll come to another solution. After I send the script, he sends me basic layouts and then pencils to look over before inking.

Ryan: You’ve been touring the comic at a lot of Cons in the past year. What would you say has been your favorite?

Sarah: I’ve got to say that LA Zine Fest is by far my favorite show I’ve tabled at. In no other city except LA have I received such a positive reaction on Pimpkillah.The zine community is incredibly supportive and there are a lot more actual comic books there than at the bigger conventions such as Comic Con. I tabled in Artist’s Alley at Wonder Con down in Anaheim and that was an awesome show. It was also my first big convention, which was both exciting and overwhelming. I definitely hope I can table there again in April ’15.

Ryan: Do you have any funny things that have happened to you while you’ve shown the comics at Cons? Any crazy super fans?

Sarah: I’m always shocked when people want me to sign a Pimpkillah issue. I think that’s weird. I never want to scribble my horrible signature over the cover, I’m always like “why do you want me to ruin the book?!” But no, I don’t have anyone who’s reached super fan status yet except my mom.

Ryan: I know this comic started as a screenplay. Do you have any plans to adapt it into any other medium?

Sarah: Oh absolutely! I am constantly working on the Pimpkillah screenplay. It’s been written now for five years but as I work on the comic series I get new ideas about plot lines and characters. I think the comic has really opened up a lot of doors within the screenplay. I’m so anxious to work on the film version but there is still a lot of work to do. I’m going to use some of my scenes in my directing workshop and see how they play out with actors. Keep your eyes peeled. Pimpkillah will be a film in the near future!

Ryan: What’s been the most rewarding thing about working on Pimpkillah and seeing it brought to life in all these great comic iterations?

Sarah: Seeing my characters and stories come to life on the page is truly an amazing feeling. The comic has given me the perfect opportunity to further explore and develop my characters and I think that’s really going to enrich this world I’ve created. Adapting Pimpkillah into a comic has proved to be a great platform to build a visual style. Plus, it doesn’t hurt that now some of my storyboards are already complete!

Ryan: What’s the next big thing for Sloane Stone?

Sarah: I just finished writing the next issue of Pimpkillah. Alfonso has already started working on the first few layouts. The story is really kicking into gear and I’m excited about where it’s going to go. Hopefully by Spring 2015 it’ll be ready.

Ryan: If Sloane Stone had a New Years Resolution, what would it be?

More info on Sarah and Pimpkillah can be found at www.pimpkillah.com.